Day One on the Camino Ingles – Ferrol to Neda

The first day’s walk ended at Neda, for us, other pilgrims choose to do a 30 km stage to Pontedeume, but that was not for us. We started around midday from Ferrol, as we had things to do there, like shop for some food, and collect our credencials. We also loved looking around Ferrol and enjoying the feeling of being in a European town – we had never been to Europe before.

Today’s walk is supposed to be about 15 km, but be prepared to walk more, or for it to feel like more. We left Ferrol using the markers, but we did get lost. but only because we were tempted to cut out the winding bits along the seafront, and we then had to walk extra kilometres. Deviating from the marked medieval route is not a good idea – don’t be tempted by the siren call of Google Earth, the medieval markers are more reliable. The camino winds along the edge of the Ria del Ferrol, and after passing the more industrialised parts, there are beaches and parks and churches to admire. 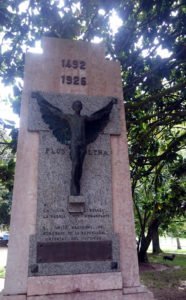 An Angel in Ferrol

It is a pilgrimage route, so regardless of religious feelings or lack thereof, it was sort of exciting to see an angel seemingly bless us on our way. If you look carefully at the photograph, there is also a small dog in background! Who knows, ti may be an angel too.

At the end of the path is a double-arched footbridge cantilevered over the water where finally crossed the Ria del Ferrol. We looked left to admire the rolling hills at the end of the estuary, and right to see over the waters back towards Ferrol. It was low tide, so some boats lay low in the water. In front at the end of the bridge, was the by now familiar granite Way marker and the yellow albergue—a waterfront position for a pilgrim hostel.