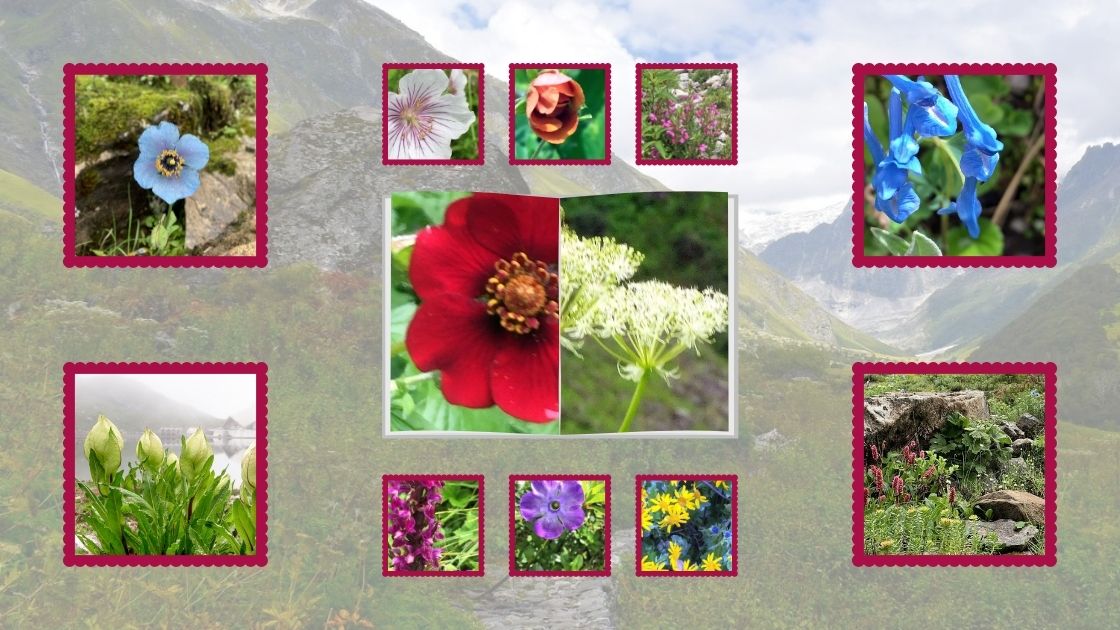 Often, in dark winter days, I wandered in spirit to these flowerful pastures with their clear-running streams set against a frieze of silver birches and shining snow peaks.

Extracts from the book – The Valley of Flowers

High in the mountains, among windswept peaks and gleaming glaciers is a hidden bower that touches the sky. Like a fragrant benediction among the sacred peaks of the Himalayas, it remained hidden until the last century. Despite the ancient pilgrim paths nearby, this valley stayed the exclusive preserve of flower-munching mountain goats and silent shepherds on their way through the valleys and passes to the dry hills of Tibet.

The rocky path to the high-altitude glacial valley is steep, slippery and soggy. To see the flowers, you must trek through the rains of the monsoon into the swirling cloud-covered reaches of the upper Himalayas. Even then entrance is restricted to a few short daylight hours. Dusk is but a brief interlude before darkness falls like a curtain when the sun slips behind the towering walls of the gorge. 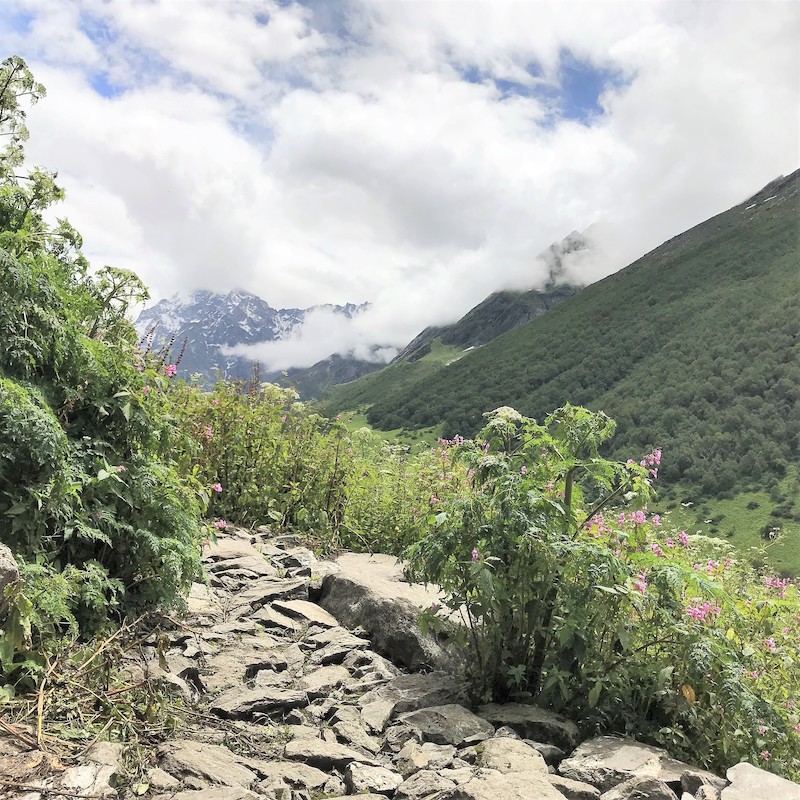 The Valley of Flowers National Park is in Garhwal, in Chamoli district, about 595 kilometers from Delhi. The tiny national park, all 87.5 square kilometers of it, is a UNESCO World Heritage Site, as is the nearby Nanda Devi National Park.

The closest airport is about 300 kilometers away, Jolly Grant Airport near Dehradun. The nearest railway stations are Haridwar and Rishikesh, 276 kilometers away. From Rishikesh the only access is by road along the sparkling Ganges, until the confluence at Devprayag where the road clings to the steep sides of the Alaknanda valley.

The northwest to southeast aspect shelters the valley from winds from the frozen north. Open to the wide skies in the summer, the heat from the golden sunlight melts the glaciers that cover the ground for most of the year. But this is India, with it’s magical life-giving monsoon. 500+ different varieties of alpine flowers explode into bloom from June to August. The flowers germinate, bloom and seed in a 12-week period, in this sky-tossed valley nestled among the spectacular peaks of the Himalayas.

At an altitude that varies between 3000 to 3600 meters, drained by the Pushpavati, it is tiny, barely ten kilometers long and two kilometers wide. This does not seem difficult, but at this altitude you are 3 kilometers vertically up in the sky. It can be hard on lungs, knees and feet, make sure you acclimatize before you go.

A Seasonal Feast of Flowers

You can trek from early June until the beginning of October, check exact dates, as it depends on the ice melt. The best time to visit is from mid July to mid August, when the flowers are in full bloom. This is also the wettest part of the year, so add time for road closures.

Day temperatures of 15 to 20 degrees C, falling to 8 to 10 degrees C by night, make for a cool trek. Layer clothing as it can get warm when trekking.

Flowers include the majestic and protected Brahmakamal, lilies, anemones, primula, and blue poppies. The blooms come in all colors and sizes and change from month to month in subtle waves of color. 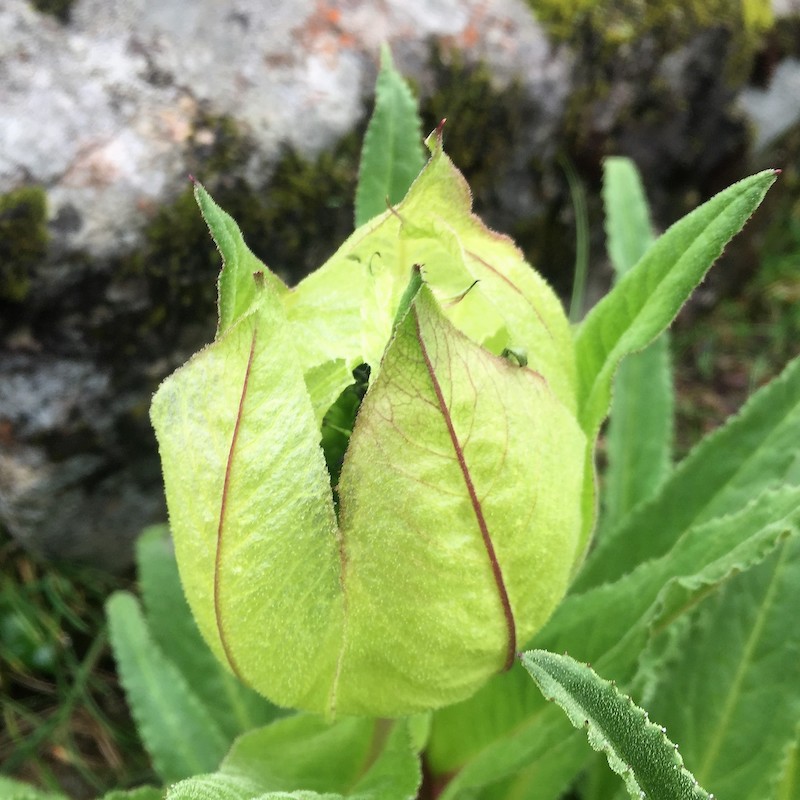 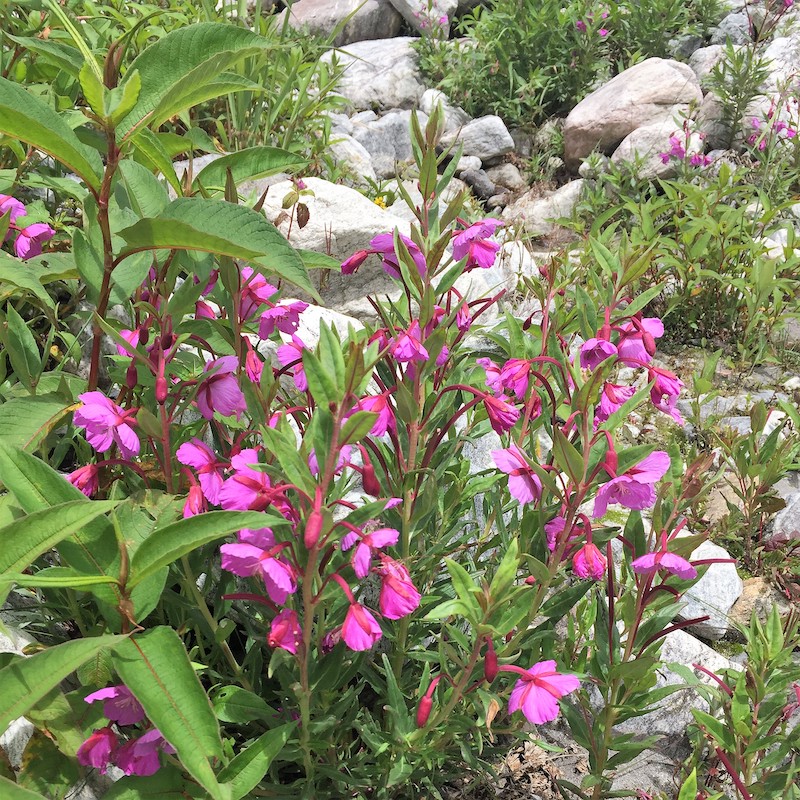 In May when the ice retreats, sweet scented primulas cover the rocky terraces in blue and snow-white anemones light up the valley floor.

With the arrival of monsoons in July, pink and red varieties of flower flush the valley with rosy hues. Balsam, Wallich Geranium, and River Beauty, dominate, although there are plenty of yellow, purple and white flowers.

From late July to the end of August, Pedicularis, Potentilla, Ligularia and many other yellow varieties appear.

More information in the Appendix.

Thinking of walking? Read the book for now!