Coming to the Himalaya and trekking has a true Russian doll effect – you keep unpacking more and more layers to your inner self and how it relates to you, your life and future. In this featured photo, its a literal image, Im taking the photo in the window, and the mountains are looking back at me – in a reversed panorama. On this fourth day of the adventure, we reach almost there – Auli in the high himalayas, for a day to acclimatise. but read on.

If you missed the beginning, go back and read. 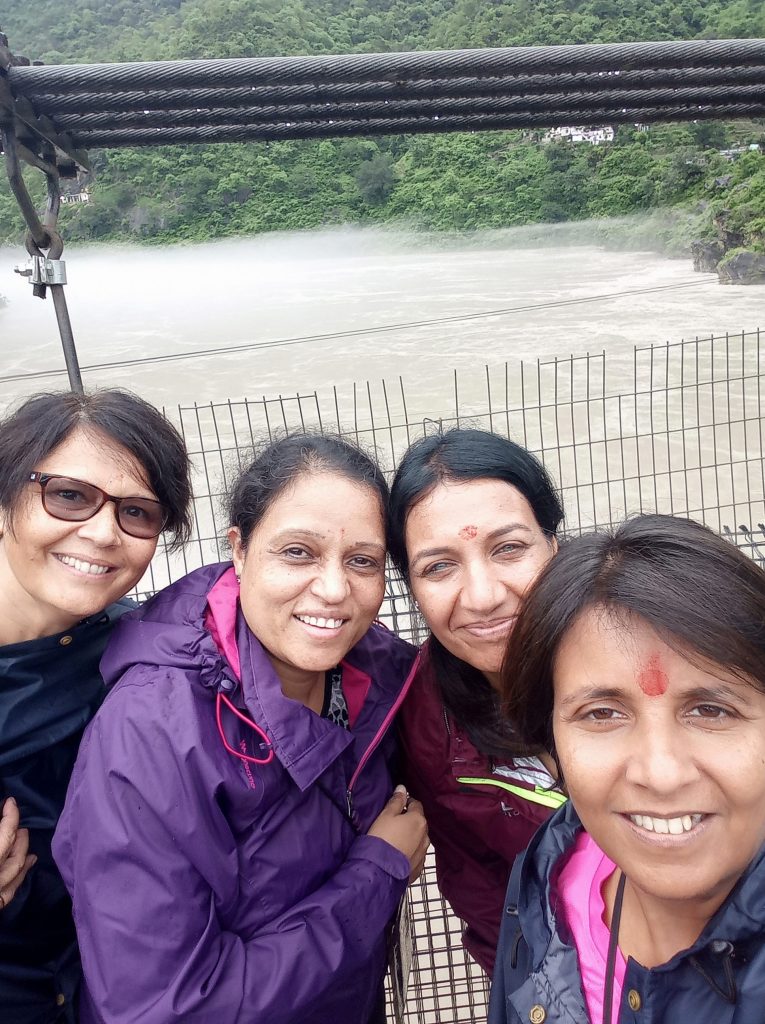 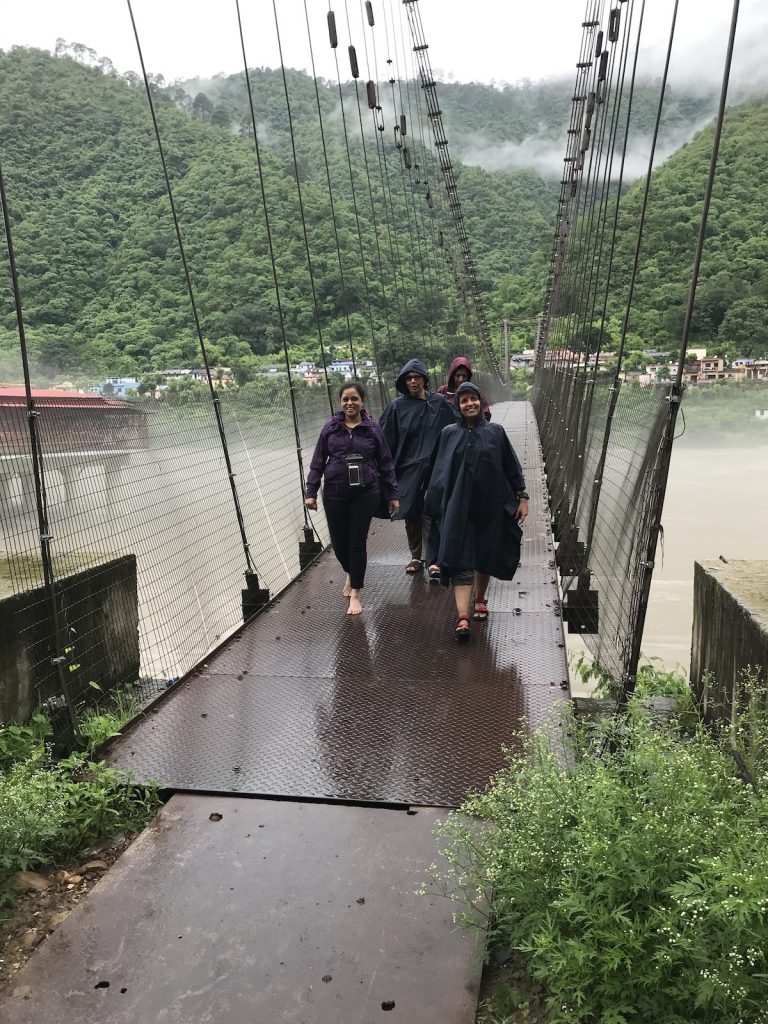 Dhari Devi – the women’s shrine is set in the middle of a roaring torrent. It’s raining, but that’s no excuse, we head down to the temple accessed only by a walkway and wonder how people visited here before this bridge existed. Did they swim out clutching desperately to mud pots, did they take boats that battled the swirling waters that threatened to suck them down to a watery grave?

The covered walkway allows us to flip back our hoods to feel the breeze in our hair, and raising our hands we tinkle the myriad brass bells that festoon – both sides of the walkway, announcing our presence to the goddess Dhari Devi. It’s a women’s shrine, rare in the Himalayas, so we head into it for privileged blessings, and after that out again to cross the suspension bridge to the village at the other side.

A mist floats on top of the river even now, late in the morning, as the river thunders around the curve. In the roar is the creak of the rope and the dull thumps from the cable car, and I strain to hear the still small voice of the Spirit that created this mysterious web of water and earth, and brought me here to create this perfect moment.

First Views of the Snows 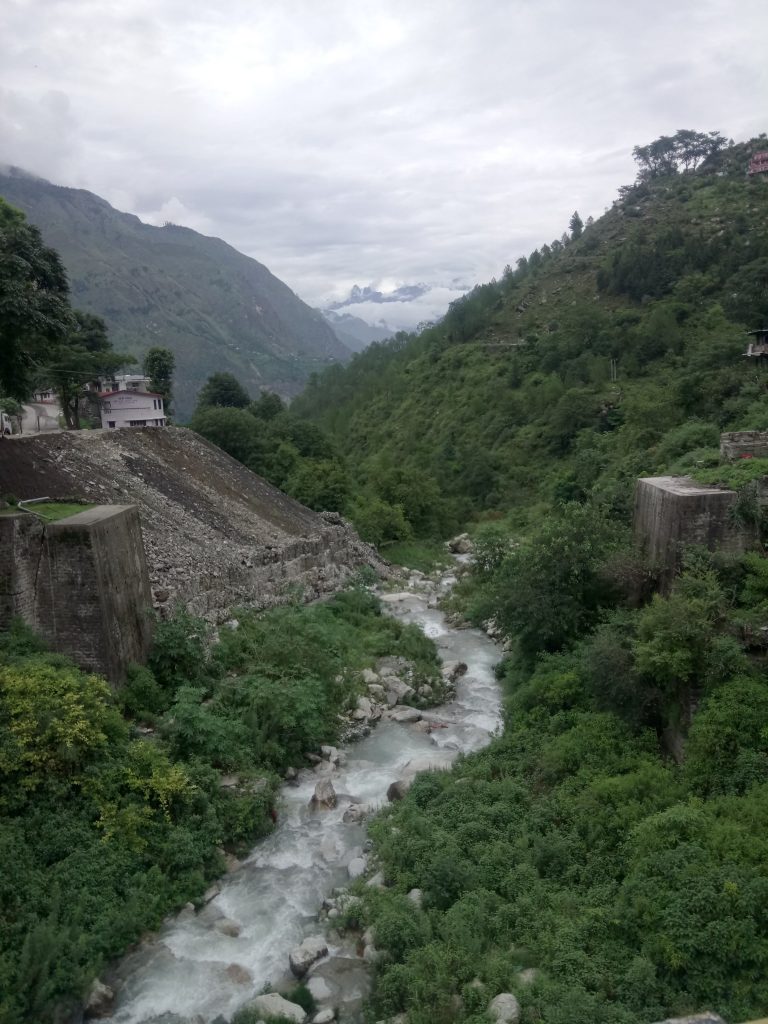 We whirl through Chamoli, only stopping to take pictures of the road signs that we see for Joshimath and Gobind Ghat. The reality of places that were mere dots on maps, send a thrill through me, and my friends laugh at the peculiar things that excite me. I wonder at the early explorers tracking through these paths and woods with only the peaks and stars to navigate by.

At Pipalkoti, in the cleft of the valley, we see it, the snow peaks of the Himalayas at last, wreathed in clouds, but unmistakable in their glow as they float across the sky. We stop and lift our eyes to the far horizon. The twisted crossing is filthy and rubbish-strewn, but look up for the view.

From here on the chatter quietens, as the road narrows and the gears grind for the serious climb towards to our final stop for the day. The road is steep, and the valleys plunge into infinity. Peeking over the side, the road below is a tiny thread that switches back in infinite loops above an invisible stream that gleams when vagrant rays of sunlight make it to the valley floor. 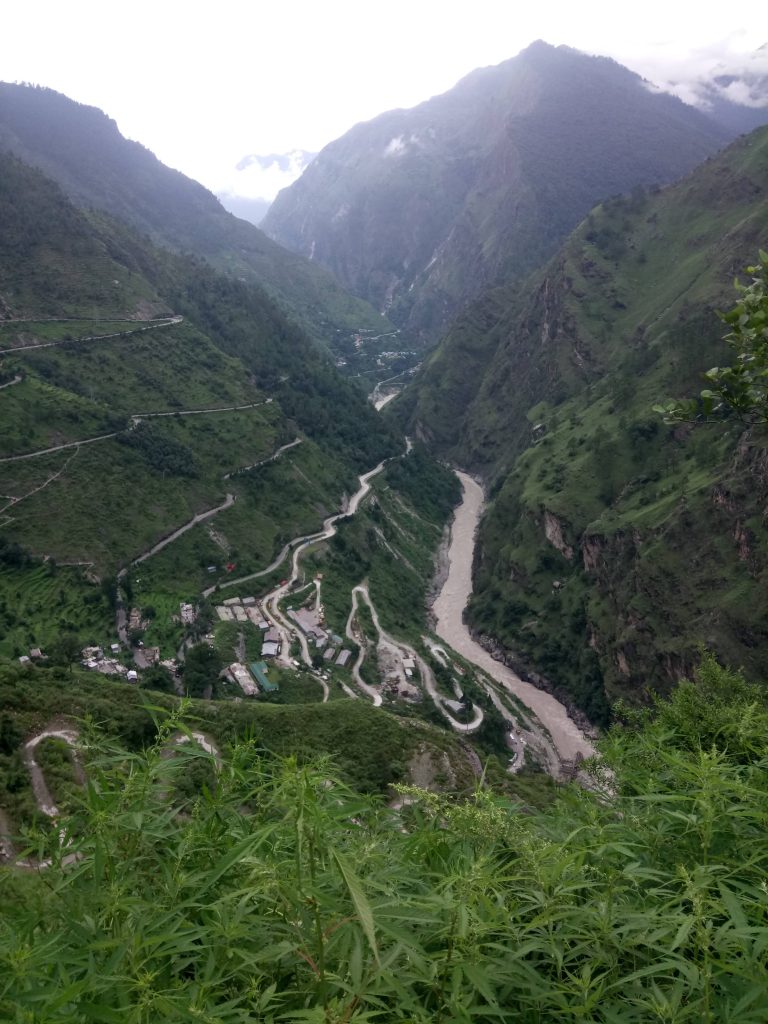 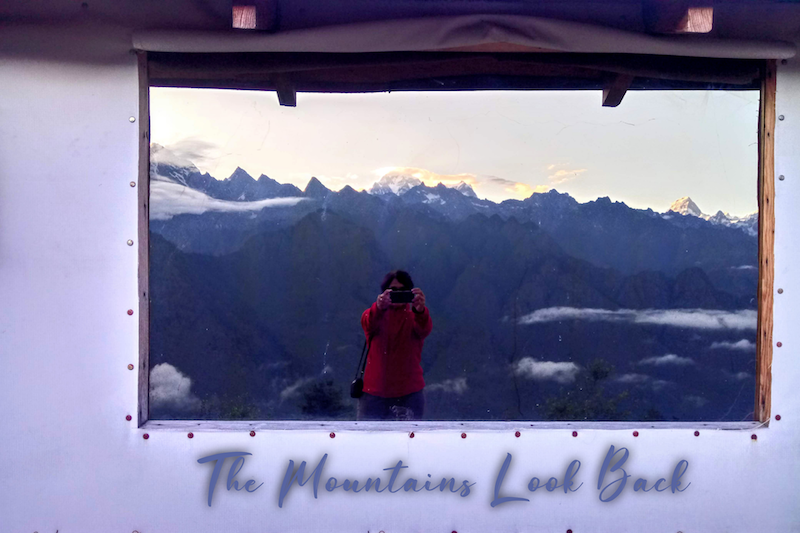 At last the road ends, literally. Up steep flights of stairs with broken treads, pay attention as the steps are of irregular heights. But for now, the “boys” from the resort come down and carry our bags up to the the log cabins with the most magnificent views of the Himalayas. Even the late afternoon clouds and mist cannot fully obscure the jagged pyramids of sloping rock topped with snow peaks.

From Kamet, to Neelkanth to Nanda Devi, all the abundance of peaks leaves us silent.

The view draws us out from the rooms, and we’d like to meet the other people here. The camp is packed with trekkers, and many of them seem to be from Bangalore. We meet people who have common acquaintances. It is camp time definitely; as we need to wait for the hot water boilers to be fired up, and in the cabins the weak lights and charging points betray their solar origins. But we have lights – and the phones and other equipment charge, unlike earlier explorers, who used flickering candles or lanterns that spluttered in the wind.

At dusk, the camp is wreathed in a ghostly mist, but later in the night the mist clears and before us like magnificent ships of the night the mountains float in the moonlight. The Neelagiri massif sits astride the horizon, and to it’s right, Gauri Parbat and Hathi Parbat hover in the distance, while closer to us Dunagiri raises a toothed spear to the sky.

There is a little snow on the peaks, but what a wonder it would be in the winter when clearer nights and more snow would create a winter wonderland. The wide windows of the cabins look out on the view, framing them like a giant TV screen. But we are really here, not simply watching it on the television. And tomorrow more views and the first trek with flowers awaits us.