Walking the way of the Cross

At 3 pm on Fridays, a group of priests lead the Stations of the Cross over the twisting, cobbles worn smooth by thousands of years of foot traffic. I waited in the 2nd station, where there are two chapels, and the chapel of the flagellation was unearthly cold – so cold that I started my usual sneezing and sniffling, and had to exit into the sunlight. In the corner was a flagstone with a game like knots and crosses carved crudely into the rock.

This is the courtyard where He was stripped of his clothes and whipped. 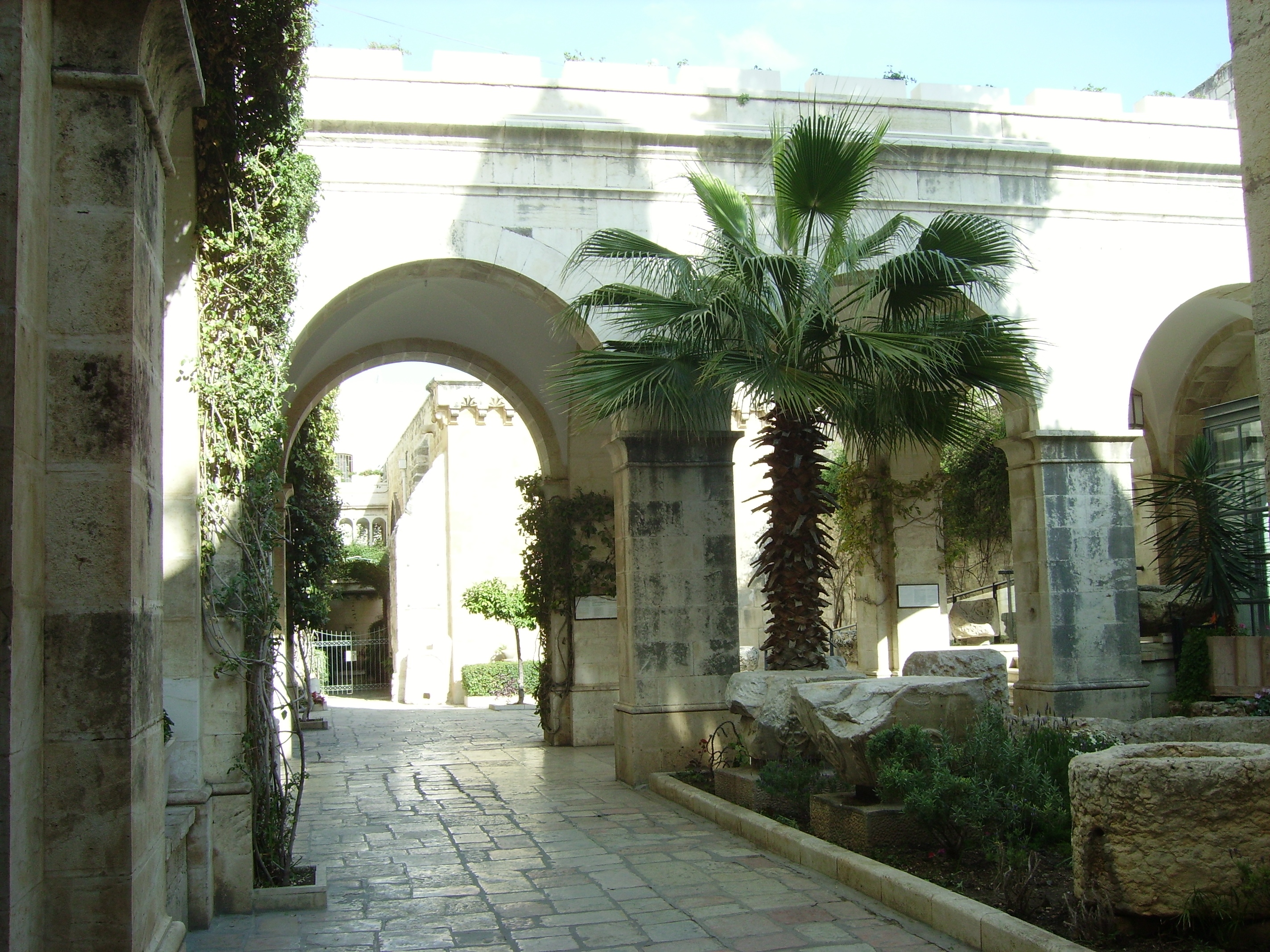 There was huge crowd for the stations of the cross, from all parts of the world. Lots of nuns and priests, but the vast majority was just ordinary folk. It was in Latin, Arabic, Spanish and English, but the prayers were in Latin. You realise just how short English is, I had long finished each prayer in English before the Latin one concluded. I also realised that I seemed to be the only one who didnt know Latin…everyone else seemed to saying the Latin Pater Nostre, Ave Maria and Gloria loud and happily in Latin.

I took these photos on the following day when I did the walking tour. I decided that a camera was not quite the tool for prayerful reflection during the Stations of the Cross on the Via Dolorosa. This is a part of the wall next to Station 5, where Jesus rested his hand, traditionally. It’s worn smooth in the hollow, with millions of pilgrims like me. I felt cold stone 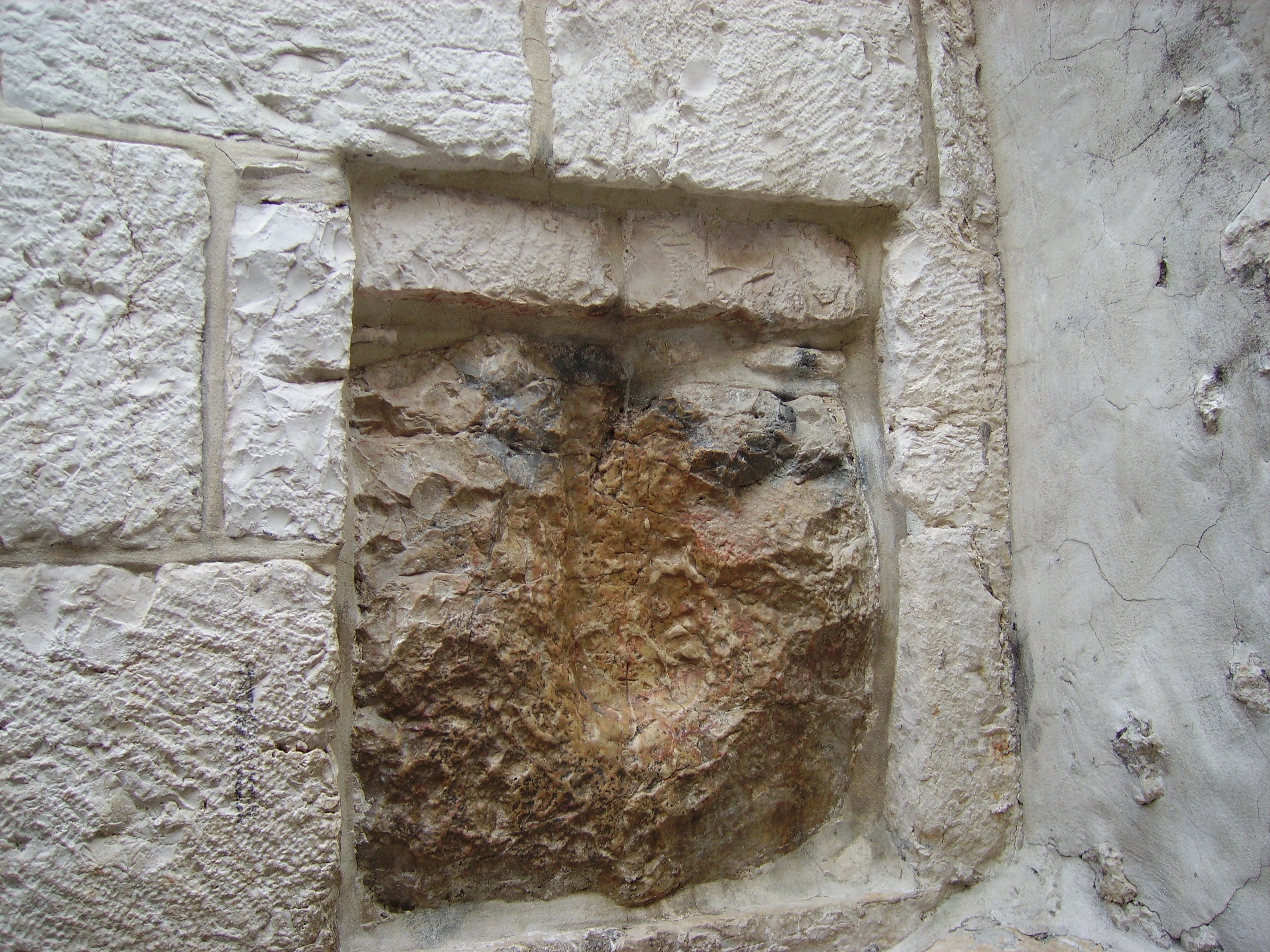 Handprint at the Fifth Station

The first station is now a Muslim theological college that was opened for us, as the actual place where Pilate condemned Jesus to death. It could be, there are hge flagstones and colonnaded columns that look Roman. While one Muslim place opened out for the flood of pilgrims, another on the way, drowned out the prayers at the third station with the wailing over the loudspeakers.

The Church of the Holy Sepulchre is a huge, dark and mysterious place. The spot of the crucufixion is resplendent with gold and silver icons. The stairs going up to the chapel is steep and worn so smooth, I had to make sure I gripped the stair rail. There was a huge crowd to enter the empty tomb, with large bands of Russians cutting in, and one Russian guide continuing her patter at full blast. The tomb itself is tiny and holds just about 5 people, you have time to just kiss the stone, and the Orthodox heavies chase you out!

I will have to read up on the various chapels, and go back maybe earlier in the day, when its not so packed.  There were frequent streams of monks and priests going through singing and chanting, of both catholic denominations, this is a place for a robust and muscular Christianity. There was the evening Angelus in the church as well, again in Latin, but very beautiful, with full organ music and fantastic singing.

On the way back, I got lost in the bazaar, as it was closing, but passed a woman selling fresh greens at the station where Veronica wiped the face of Jesus, and then found a lot of wonderful sweet shops. I swear they were selling varieties of gajjar halwa, jelabis and Bombay Halwa. I’ll go back and try to find them again, as uncharacteristically, I was not in a sweet eating mood.