It was mid December and we had the mountain,  and Chopda, mostly to ourselves. White Magic Adventures doing all the amazing logistics and heavy work, let us get on with immersing ourselves in the awesome ranges that surrounded us.

At Chopta, we felt we were eyeball to eyeball with some of the highest peaks in the world, by Tungnath and Chandrashilla we were almost above them, and the clouds. You can understand then why gurus and legends grow about people running away to the mountains. However, I would have serious misgivings about going off there without our support team who carried hot lunch up to us at Tungnath. Ah the champions!

The morning began of course with the best views of the roof of the world, never mind that we were in a tent, and the temperature was -4 degrees celsius. Can your heart not sing when you unzip the tent door to this? 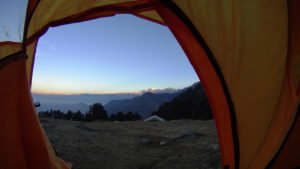 Tent with a View

The peaks include Kedarnath, the Gangotri ranges, Vasuki, and just hidden from view is Chaukhamba.

But as we climbed one of the points to look out for is how Chaukhamba suddenly appears shining white above the mountains. 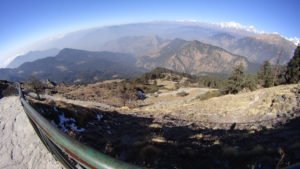 We were headed for Chandrashilla to get a 180 view of the ranges, on the pilgrim path to Tungnath, the last of the famous Shiva temples of Garhwal, and possibly the highest temple in India.  It was still early in the morning, so we had Monal exploding out before us alarmed by the intrusion of hiking booted humans into their sun bathing domains. Monal is Himalayan Pheasant, almost peacock like in their colours. We also had glimpses of grouse, and plenty of soaring kites and eagles, but though Nitesh, our wildlife photographer guide, got lots of photos, we amateurs had to be content to see them flash away out of sight and skitter about complaining in the rhododendron bushes.

The flagstone path is well maintained, lined with occasional patches of unmelted snow white against the brown sedge, all the way, with railings on the steeper slopes, zigzagging ever higher through the softly grassed lower meadows, the rhododendron forests, the stacked stone paddocks of the shepherd nomads and finally above the tree line to Tungnath, where we rang the giant brass  bell to announce to the gods that we had arrived. ( umm, they took no notice all was locked and barred..only a host of phantom listeners). I was tempted to shout out ” Tell them I came and no one answered, that I kept my word.”  ( The Listeners, Walter de la Mare). Don’t you love it how we can be in the depth of the deepest Hindu myths, and I hear an English poem come into my head unbidden? Sorry but I know no slokas. 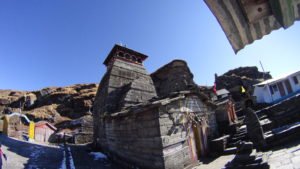 But don’t be deceived, Tungnath is at least 1000 yrs old, and traditionally this path was tread by the Pandavas to do penance for killing their cousins, the Kauravas. So it is an old old pilgrim path, and it gave us some satisfaction to walk in the footsteps of the gods. Chandrashilla is also supposed to have been a peak where Rama meditated. 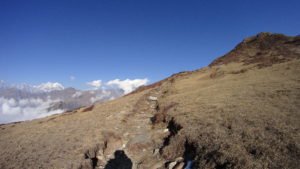 Past Tungnath, a collection of small stone temples and chapels and altars, the path gets slippery and shingly on the way to Chandrashilla, and the pace slows. All the temples and altars were locked up tight. All the idols move down to Ukhimath apparently for the winter, so we were up there where even the gods didn’t hang about in the winter. 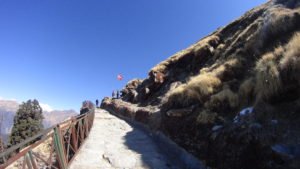 Half the party decided to saunter back to Chopda, and a few of us pushed on. By the end it was only myself and Pawan, our guide, carrying my backpack for me so that I could climb a bit higher, and then we had to do some jogs down the slopes holding on to each other so as not to roll off the mountain! Thanks Pawan!

The clouds were boiling up from  the plains below, and we were trying to keep ahead and above them to make Chandrashilla before 3 pm. Night falls early, so we needed to have time to return to Chopda in the sunlight. 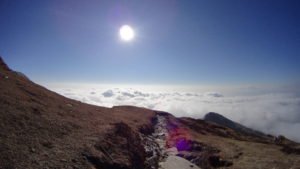 This is where we met a young French couple who have taken a year off work and were tandem biking all the way from France to Thailand. (They had left their bike at Chopda.) They had pedalled all the way from New Delhi, I was exhausted just thinking of this. Walking the 4 km up to Tungnath and then the 1 odd km to Chandrashilla was a challenge. my excuse is that my lungs are ruined by asthma and the air is very thin at that altitude. We were tiring  very soon, and the altitude made it hard to sleep at night despite all the exertion. A longer trek perhaps, with more time to acclimatise?

Any excuse to return to the Himalaya! 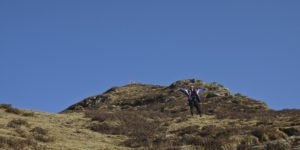