The Pilgrim Trail to Hemkund

Today is Day Seven, and the after one day up at the Valley of FLowers we take the right fork to hike up to Hemkund

If you missed the beginning, go back and read.

With one last pull and push on my trekking poles, the last switchback is negotiated and ducking down beneath the blue tarps, I enter a narrow path lined with shops selling goods and shawls to offer at the shrine. Gleaming silken shawls in pink, orange and purple jostle hard steel bangles, and other offerings.

Up the stairs and one last right turn, and the sacred destination is mirrored in the emerald waters of the lake. 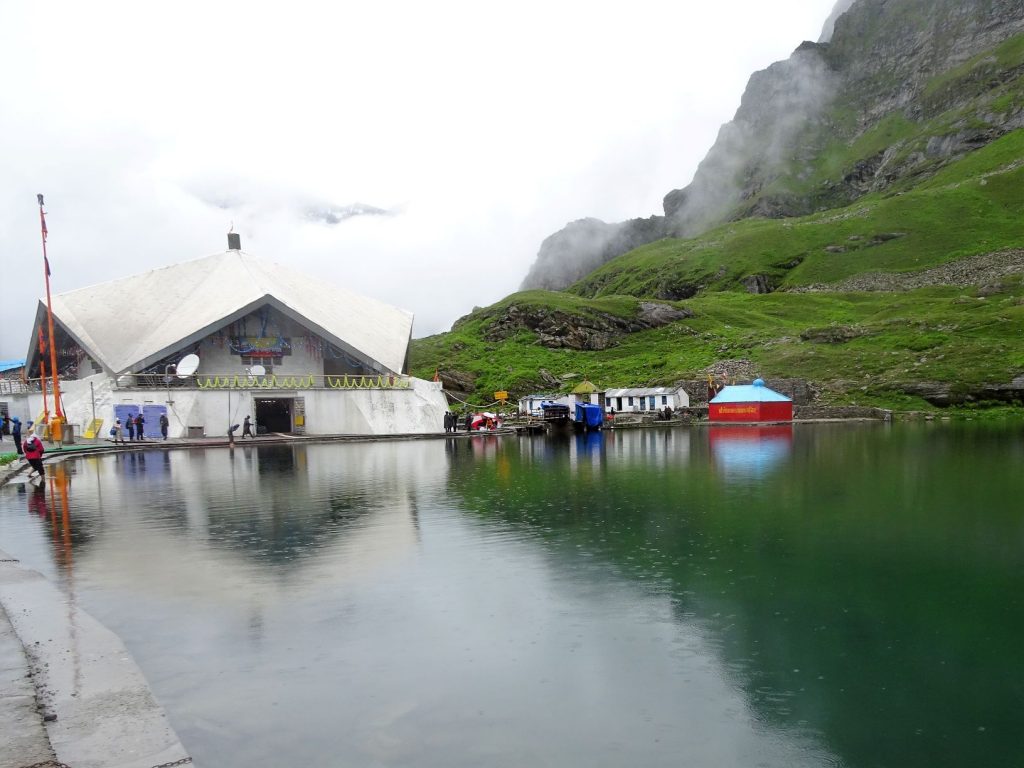 The lake reflects the green slopes, rocks and the clouds, and only a splatter of raindrops interrupts the perfect image in the water. A circular group of peaks crowd around the lake, and down from them creep thin threads of glaciers.
The seats in the shed are welcoming and dry, and I join the rest of the pilgrims shucking off shoes. I lean back, the weight off my feet, and I take a large breath of the thin pure air before tiptoeing into the lake. Wait.
There is a guy who goes on and on – shoes off, socks off, shirt off, hiking pants off…stop please. Cheered on by his friends, he tiptoes in looking for a flat spot in the rocky floor of the lake, he wades out slowly into the freezing water, before a sudden plunge, a faster leap up, and a splashing rush to the shore. His friends laugh and chuck a towel at his shivering shoulders.
I lift a doubtful foot. I’m not proving any points here. I dip an uncertain toe into the frigid waters and beat a quick retreat. The only ablution today will be back in the hotel – that wood–scented hot water in the bucket seems a treat.
Some water is to be looked at, and some to be bathed in, and ne’er the twain shall meet.
A forlorn Laxman temple nestles up to the gurudwara, one of the only shrines dedicated to Laxman alone. It is locked up, a concrete box enclosing a dark alcove with a barely visible idol.
In the open shining halls of the gurudwara, the Guru Granth Sahib is being chanted.

I like Sikhism, the object of their veneration in the temple is a book – the ultimate Guru.

The Lake and the Spear

Hemkund, the name derives from the words Hem (“Snow”) and Kund (“bowl”). The tarn is surrounded by seven snow– wreathed peaks. and since you are at 4600 meters, they don’t seem too much higher than you. This is a lake dangling in the sky, held up by threads of waning glaciers and cupped by a bowl of slotted shale.
I half hope that a Sikh King Arthur Singh will appear on a rearing horse and toss a gleaming Excalibur into the still waters, with the Lady of the Lake seizing it and disappearing into the depths of Hemkund Sahib with scarcely a ripple.
In a surreal time shift, a Sikh priest in flowing saffron robes and a towering turban strides barefoot out of the temple, his medieval magnificence completed with a shining spear flut- tering with tassels of gold. Behind him, the chants from the Gurudwara fade into silence. The spear is ceremonial only, there will be no impaling of heretics today. Neither will he toss it into the lake. His stern face relents as I ask for a photo with him.
There was no way to do a parikrama round the lake. Stern warnings prohibit this is in multiple languages, so we line up at gurudwara, place our shoes carefully in a row of lockers and enter the temple barefoot and with our heads covered. 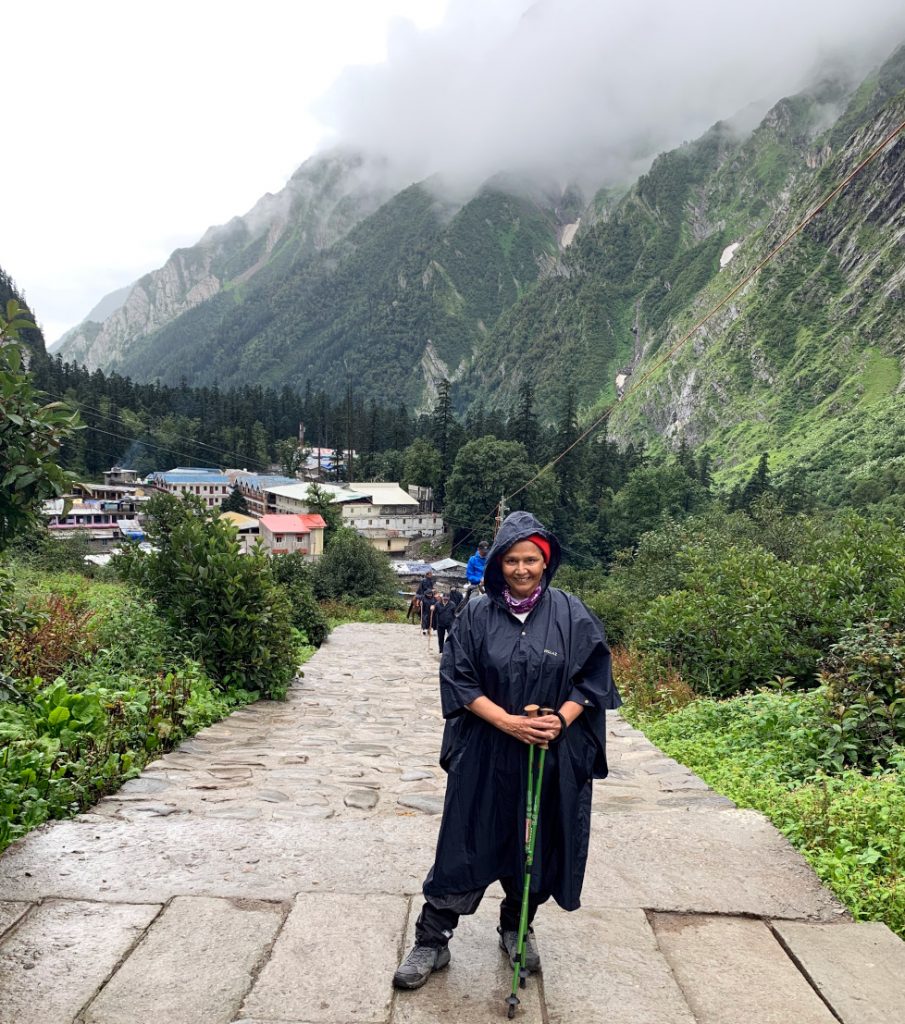 The Power of a Vow

The clouds and threatening rain make the steep path slippery and dangerous. But I prefer to walk, despite the importuning of many muleteers. I do not understand how mules judge edges and heights, but I’m unwilling to risk my neck and life to the broken toenail of a recalcitrant mule. The mules are mostly well fed and well looked after, caparisoned with colorful braids and ribbons. There’s always a lead mule, who decides the stop and start times of the meandering way. While mules are not allowed in the Valley of Flowers, they are allowed here, a boon for the many older pilgrims.
I will walk downhill leaving the glaciers and clouds to enter the lush forests of the valley below. On my way down, I stop to talk to a grey–haired grand- mother, her head wrapped in a dupatta, borne up on both sides by teenage grandsons, every excruciating step of the way. She had a long way to go, but her grandsons, with their barely there beards and downy moustaches, shrugged and said she had refused a pony or porter, as she had made a vow to walk – barefoot. Nearly there, I smile.