Delhi figured large in our travel plans, to see friends, and to reconnect with North India. North India was where I spent most of my childhood, and in our frequent postings from place to place, Delhi was usually a stop where we changed trains, transferred to planes or just gaped in astonishment at the city that occupies so much mental geography. I wanted to share this with the teens who had never experienced North India. You haven’t seen India if you haven’t seen the teeming chaotic Hindi heartlands.

It was also where the teenage contingent had had enough one night of the traffic, the chaos and the long drives to get anywhere and wanted to just stay home and watch TV and figure out what the ads were selling. The TV in our apartment had more channels than we have at home, including enough anime to keep the schoolies amused.

And so, we sallied out to revisit the sights of New Delhi, the corridors of power in Lutyens Delhi, that somehow link ancient and modern India, through the iconic India Gate. India Gate also has the eternal flame at the tomb of the unknown soldier, and like all military brats, we can’t go past that without paying our respects. By twilight, Delhi fades to grey, from dark ominous hulks in nearly black, to luminous wisps of steam that mask a lot of the dirt and messiness that you are forced to notice in the day.

Before that, we had to swing by the brilliantly lit South Block, which houses Army headquarters, and other secretariats from where India is ruled, and Rastrapati Bhavan, that lurked Hogwarts-like in the gathering gloom. We had to walk a fair bit to get nearer, and even then, security blocks made sure that you could only stop for a short time. Im not a great photographer, but a lot of the blurriness is real – because of the Delhi smog that hangs about in the winter. 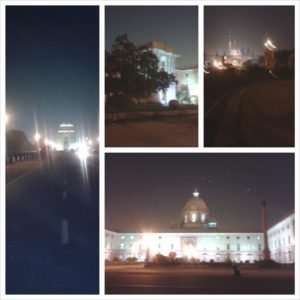 Once upon a time, not very long ago, India Gate gleamed like a glowing portal from a good distance away, but this night in mid December, it seemed to have vanished, and I kept asking the driver if he was sure this was the route but at last it emerged reluctantly from the Delhi midwinter smog, and the driver asked us to jump out, illegally of course, and walk the rest of the way, as the way.  The path to the last viewing position was lined with souvenir stalls, eating stalls and tea shops, closer to the Gate, there were chaiwalahs selling hot tea out of steaming kettles, in , alas, plastic cups. The little clay cups or kulhads seemed to have vanished in a tide of cheap plastic.

India Gate was magnificent, and the smog around it was illuminated by the glow. But I was more  interested in the people around, and the feeling in the air, what was it? Love, patriotism, or just out for a night of wintery fun? It’s barely dark really, just about 6:30 pm.

Clockwise, mother and child in the little knitted headgear, a bonnet in rather lurid purple and pink, and a pink jumper. Poor kiddo, note that all the adults are quite happy without any warm clothes; people walking towards India Gate on one of the only stretches of road without crazy traffic; a pair of chaiwallas with their kettle and stacks of cups; Delhi police of course can drive on this road and park anywhere, in this picture, if you look through the arch you can see the eternal flame at the tomb of the unknown soldier; a couple argue about where to go for dinner ( I overheard it!),  and the other group of men were waiting for friends.

There were lots of  couples, I took some photos for one, and wondered if her mother knew she was out. In the bigger cities, you tend not to be too friendly with strangers, but later, when we were walking back to the car park, they overtook us in a large auto-rickshaw, and waved madly to us, swinging out and flashing amazing smiles.

We must have looked like locals, as a car pulled up as we were waiting to cross the road, and asked where the car park was. We waved downstream…didn’t tell them we had no idea, we were just calling the driver  to come pick us up.