Finisterra – Why go to the ends of the earth?

What do you do when you get to the end Camino in Santiago? You keep walking! This is where we reached on the day after. It was cold and very windy here, buffeted by winds that swirled about the cape where Europe meets the Atlantic.  There’s a lighthouse here overlooking a steep slope down to beach with tumbled rocks and swirling waves, where some pilgrims traditionally burn their shoes or their clothes. Pilgrim, at the end of the camino, leave behind every vestige of your old self, and come out a new person! When you achieve a goal, that is indeed what happens, you are a different person. 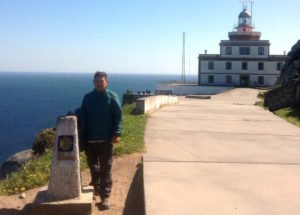 Point Zero on the Camino

What do you do when you reach a goal? You set another goal! That’s exactly what we were doing here. We had reached Santiago the previous day, attended the pilgrim’s mass, and collected our Compostela. Then we decided that we just we had to do this last bit but we didn’t walk to Finisterre, 60 kilometers from Santiago. Too much because we had a plane to catch, so we became tourists for a single day and came in by bus.

This coast is called the Coste del Mort, the Death Coast. The seas were so rough in winter, that lots of ships crashed on these waves. We were so grateful, that despite us walking the camino, we didn’t really have to struggle to reach the start point. We achieved the goal and more.

This was the first time ever that I’d seen the Atlantic and with the sound of the waves and very loud winds, someone was playing the bagpipes. A fitting end to our health adventure! Health is an adventure, and I believe in walking the talk! You can read all about it in my book.
It’s never too late for a new dream and it’s never too late for a new goal. What goal are you setting today?